First I want to acknowledge that Swift Debug builds are hideously slow. This isn't news to me or anyone who has seen my talk on Swift optimisation. To be clear this is a problem which Apple have said that they are working on but I still don't think it is an absolute block on any real development because there are fairly simple workarounds.

If you want to see the code under discussion it is all in my repository here with a log of my development. The first commit is the Zipfile that David made available in his blog post, the rest is my testing and development of the Swift version.

These are my performance figures (for 100 runs so it isn't directly comparable to David's):

I don't know if it is computer differences, if David hasn't tried the code I sent him last night or if one of us is doing it wrong but we are currently in straight disagreement about which is faster in an optimised build, Swift in -O or Objective-C in -Os.

On my computer the Objective C version takes 80% longer than the Swift version. In his post David says "it’s still twice as slow as the ObjC version in RELEASE mode." which is essentially the opposite result to the one I get.

Where I would dispute with David is his view that this is an absolute showstopper than cripple's Swift's usefulness. There are ways to manage without the debugger, it still works with the assembly if needed anyway and as I illustrate there are workarounds for the issue. 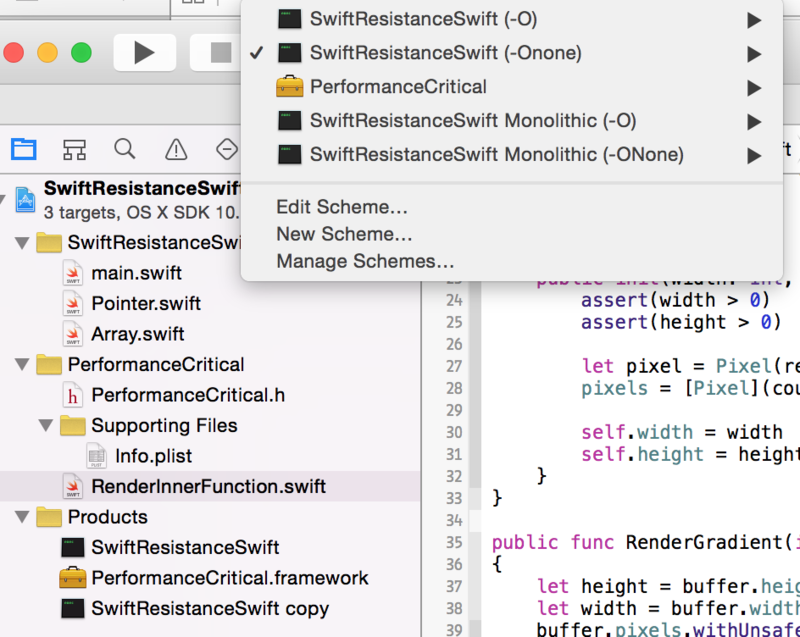 However in the repo I show the workaround of moving performance critical code to a library or framework that can be built optimised while the bulk of the complexity and logic in the project is run without optimisation for simplicity of debugging. You can even set up a separate monolithic target for the release when you can afford a long build time and do not need to debug the result having already set everything up and tested it.

Using this for this test results in the same performance figures as the optimised build but it is really cheating as the critical code is optimised and there isn't much more code under test. [Update: And the same approach is obviously possible in Objective-C too.]

I am getting runtime warnings like this at the moment if anyone has any suggestions I would be grateful [See comment from Pierre Lebeaupin, seems an issue with Swift commandline applications at the moment]:

We also definitely differ on our prioritisation between optimised and unoptimised (debug) performance but that is just a matter of what we are working on at the moment and where a whole range of different views are completely valid and useful.